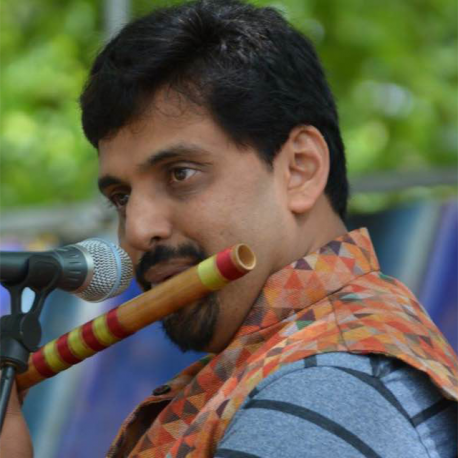 Ravichandra Kulur was initiated into Carnatic classical music at the of six. He initially took up the Mridangam and the Kanjira–South Indian percussion instruments–under the guidance of guru E P Narayana Pishardi.

His father, Professor K Raghavendra Rao, was a respected flutist at the time. Ravi surprised many when he picked up the flute and played it with ease and skill. It appeared that he had inherited his father’s ear for music and skill with the flute. Regularly practicing under his father’s guidance, Ravi started performing duets with his father and even held solo concerts at the age of 9.

Brought up in an atmosphere of music and the love of melody and rhythm, Ravi attended many concerts and voraciously listened to classical music on tapes. When he wasn’t listening to music or performing, Ravi would spend hours practicing with his brother K.U.Jayachandra Rao who is a skilled mridangam player and his father. Keen to take up music in the future, he always knew music would play a huge part in his life. During his days at college, Ravi developed a keen interest in other forms of music, experimenting with fusion and world music and discovering Jazz and broadening his knowledge of classical music to include Hindustani classical as well as Carnatic.